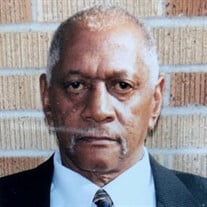 William Warner Strain was born on Monday, February 21, 1938 to the late Floyd and Nancy Chatman Strain. He answered God’s call on the morning of Tuesday, June 18, 2019. William was educated in the Robertson County, Tennessee school system. He attended Bransford High School in Springfield, Tennessee where he was a star running back for the football team and graduated in 1960. He served his country in the United States Army and was honorably discharged in 1957. He was a faithful member of the Bell Street Church of Christ in Ashland City, Tennessee until his death. William was a resident of Ashland City, Tennessee for 72 years. He loved the outdoors and was his happiest when he was at home on the farm. He had a wonderful sense of humor and never met a stranger. With pleasant memories to cherish and treasure are Rebecca Hurt Strain; five daughters: LaKimbra Hurt of Springfield, TN, Patricia Strain and Tina Strain both of Tustin, CA, Warrene Strain and Wynnette Strain both of Stockbridge, GA; one brother, Robert Strain of San Antonio, TX; three sisters: Mattie B. Jones and Annie McGill both of Gary, IN, Mildred (David) Lewis of Ashland City, TN; eight grandchildren: Termeshia Darden, Terricka (LaVincent) Hardy, Durrell Moss, Durron Moss, Brandon Carr, DeJon Moss, Denaye Deason, Tia Harris; ten great grandchildren: Braniiya Carr, Brayden Moss, Christian Hardy, Amari Moss, Brayden Carr, Levi Moss, Dimitri Hernandez, Kimoni Moss, Mariah Harris, Camille Hardy and host of loving nieces, nephews, cousins, relatives and friends. One daughter, Cheryl Strain preceded him in death. His celebration of life will be Sunday, June 23, 2019, at 2pm in the Chapel of Cheatham County Funeral Home with Andrew Carney officiating. The family will receive visitors on Saturday, June 22, 2019, at the funeral home from 12noon until 4pm and on Sunday before the service from 1pm until service hour of 2pm. Burial will be Monday, June 24th, at 10am in Middle Tennessee State Veterans Cemetery in Nashville, Tennessee. Cheatham County Funeral Home 615-792-2552 online condolences at cheathamcountyfh.com

William Warner Strain was born on Monday, February 21, 1938 to the late Floyd and Nancy Chatman Strain. He answered God&#8217;s call on the morning of Tuesday, June 18, 2019. William was educated in the Robertson County, Tennessee school system.... View Obituary & Service Information

The family of William Warner Strain created this Life Tributes page to make it easy to share your memories.

Send flowers to the Strain family.