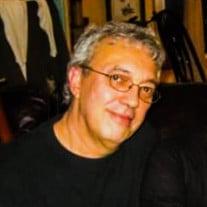 William “Ric” Richard Brown, age 71, went to his heavenly home on Sunday morning, November 15, 2020, at Centennial Hospital in Nashville, Tennessee. Ric was born in Nashville, Tennessee, on October 21, 1949, to William Floyd Brown and Dorothy Elizabeth Perry Brown. Ric was a member of Cheap Hill Church of Christ and a high school graduate of Cheatham County Central High School, Class of 1967. Ric was a lifelong creator. He began playing music as early as middle school and kept up the practice throughout his life, even playing and singing regularly with his sister Patrice Tracey for the residents of Vantage Pointe Village, where he resided in his final years. Ric’s visual creativity made itself known in his long career as a hairstylist, as well as woodworking and painting. Ric was also a lifelong communicator, whether in his professional roles as cosmetology practitioner and presenter, his decades-long commitment to the Alcoholics Anonymous community as participant and sponsor, or his tremendous work later in life helping victims of substance abuse on their road to recovery. Finally, Ric was a lifelong devoted family member, forging deep relationships with his five siblings, and especially with his mother, who became his daily companion, first at her home in Ashland City, and later as a co-resident of Vantage Pointe. Ric lived large and loved meeting people. His life touched the lives of hundreds of other people, all of whom will remember him vividly. His expansive presence, keen intellect, and sly sense of humor will be sorely missed. He is preceded in death by his father, William Floyd Brown, and step-father, W.B. Lockert, Jr. He is survived by his mother, Dorothy Lockert; children, Erica (Clay) Steakley, Patrick (Natalie) Brown, Megan (Mark) Hartless, Shader Hoffman, Porter Hoffman, and Payson Hoffman; brothers, Jake (Theresa) Lockert and Perry (Carol) Lockert; sisters, Janet Murray, Julie (Ray) Hibbs, and Patrice (Joe) Tracey; and grandchildren, Dot Steakley, Noah Brown, Lennon Hartless, and Perry Hartless.A celebration of Ric’s life will be held in the Spring of 2021. In lieu of flowers, the family requests that donations be made to the 23rd Judicial Drug Court Program. Donations are tax deductible, and can be mailed to 23rd Judicial Drug Court Program, PO Box 464, Ashland City Tennessee 37015. Cheatham County Funeral Home 615-792-2552 on-line condolences at www.cheathamcountyfh.com

The family of William Richard "Ric" Brown created this Life Tributes page to make it easy to share your memories.

Send flowers to the Brown family.