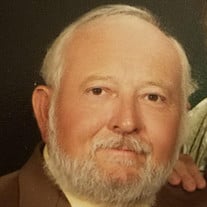 GIDEON, William “Bill” Joe, age 69, passed away on Saturday, October 20, 2018, at Vanderbilt University Medical Center in Nashville, Tn. Bill was born in Hobbs, New Mexico, on February 25, 1949, to the late Dewey and Loretta Farmer Gideon. He was a graduate of Bledsoe County High School, a member of Scottsboro First Baptist Church, and retired industrial salesman under the management of Lanny McGowan. He is preceded in death by his parents and brother, Clarence Gideon. He is survived by his wife of over 48 years, Cynthia Sadler Gideon; daughter, Susan Michelle (Daniel) Farmer; sister, Laverne (Tommy) Heckaman; grandchildren, Caitlyn, Cody, Paul (Brittany), and Nikki; and great-grandchildren, Mark, Gideon, Chloe, Bryer and Bentley. He was a heart transplant recipient in 2001 and many thanks from the family to Dr. Mark Wigger and his team at Vanderbilt Heart as well as the nurses in the Palliative Unit (5th Floor) at Vanderbilt. A celebration of his life will be Sunday, November 4, 2018, at 4pm in the Chapel of Cheatham County Funeral Home with Brother David Royalty officiating. Visitation will be Sunday before the service from 2pm to 4pm. “He fought a good fight, he kept the faith and he won the race!” Cheatham County Funeral Home 615-792-2552 cheathamcountyfh.com

The family of William "Bill" Joe Gideon created this Life Tributes page to make it easy to share your memories.

Send flowers to the Gideon family.