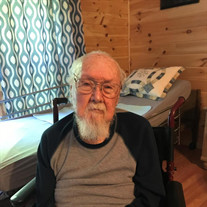 Thomas Eugene Williams, age 90, passed away on Monday August 3, 2020, at his home in Ashland City, TN. Thomas was born in Hermitage, Tennessee, on July 31, 1930, to the late Lowell L. Williams and Bessie Morris. Thomas served our country in... View Obituary & Service Information

The family of Thomas Eugene Williams created this Life Tributes page to make it easy to share your memories.

Send flowers to the Williams family.