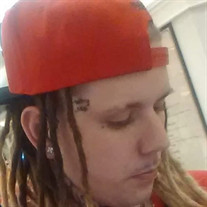 TERRY “TJ” CARL ADAMS, JR, age 27, passed away on March 29, 2018. TJ was born in Nashville, Tennessee, on September 16, 1990, to Terry Carl Adams, Sr., and Leah Coslow Adams. TJ will be remembered by his free spirit and love for his family and life. He is preceded in death by his maternal grandmother, JoAnn Coslow. He is survived by his parents, Terry and Leah Adams; daughter, Zoie Nevaeh Adams; sisters, Cassidy and Allie Adams; niece, Arianna Adams; maternal grandparents, William (Patricia) Coslow and paternal grandmother, Alice Raines, as well as numerous friends. Funeral service for TJ will be Wednesday, April 4, 2018, at 1pm in the Chapel of Cheatham County Funeral Home with Pastor Chris Moore officiating. Burial will follow in Neptune-Smith Cemetery in Ashland City, Tennessee. The family will receive visitors at the funeral home on Tuesday, April 3rd, from 3pm to 7pm and on Wednesday, April 4th from 10am until service hour of 1pm. In lieu of flowers, donations in TJ’s memory may be made to help with funeral expenses c/o CHEATHAM COUNTY FUNERAL HOME 615-792-2552, cheathamcountyfh.com

The family of Terry "TJ" Carl Adams Jr created this Life Tributes page to make it easy to share your memories.

Send flowers to the Adams family.