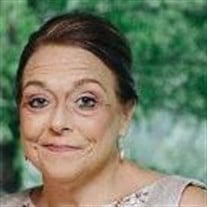 TAMMY MICHELLE REED, age 50, passed away on Saturday, August 12, 2017, at St. Thomas West Hospital in Nashville, Tennessee, surrounded by her loving family. Tammy was born August 26, 1966, in Nashville, Tennessee, to the late, Tommy Hampton and Brenda Hudgens Hampton. Tammy was a Christian, a member of the 1985 Class of CCHS and formerly worked as a teacher’s aide. Tammy was a loving mother to her daughter, Hope (Andrew) Oakley. She is preceded in death by her parents and husband, Mike “Bubba” Reed. She is survived by her daughter, Hope (Andrew) Oakley; brother, Todd (Stacy) Ford and her beloved pet, Ollie. Funeral service for Tammy will be Monday, August 14, 2017, at 12noon in the Chapel of Cheatham County Funeral Home with Brother Leon Edwards officiating. Burial will follow in EverRest of Cheatham, LLC, in Pleasant View, Tennessee. The family will receive visitors at the funeral home on Sunday, August 13, 2017, from 1pm to 8pm and on Monday, August 14, 2017, from 9am until service hour of 12noon. Serving as pallbearers are: Bob Binkley, Robert Winters, Reed Williams, Jimmy Reeves, Josh Combs, Paul Potts, Steve Bowman and Marvis Boyd. In lieu of flowers, donations in Tammy’s memory may be made to Tennessee Donor Services c/o Cheatham County Funeral Home 615-792-2552 cheathamcountyfh.com.

The family of Tammy Michelle Reed created this Life Tributes page to make it easy to share your memories.

Send flowers to the Reed family.