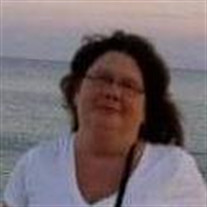 SONYA RENE’ ELLIOTT, age 50, passed away on Tuesday, February 7, 2017, at Centennial Medical Center in Nashville, Tennessee. She was born on October 12, 1966, in Nashville, Tennessee, to Chester Ray Jenkins and Rassie Moon Jenkins. She was a member of the McGavock High School Class of 1985. Rene’ worked for A.O. Smith in the past as well as McDonald’s and Hardee’s. She is preceded in death by her father, Chester Ray Jenkins and her two brothers, Chester “Bubba” Ray Jenkins, II, and Chester Ray Vaughn. She leaves to cherish her memory her mother, Rassie Jenkins; son, Kevin Elliott; daughters, Jessica Elliott and Brittney (Dustyn) Rollins; three sisters, Sharon Raye Jenkins, Stephanie Rebecca Jenkins (Wes Johnson), and Nikki Jenkins; and grandchildren, Fiona and Kryin Whittier, Skyler Elliott, Millie Gay, Kaylee Rollins and Baby Girl Rollins. A memorial service will be Sunday, February 12, 2017, at 3pm in the Chapel of Cheatham County Funeral Home with Brother Drake Jenkins officiating. The family will receive friends before the service from 1pm to 3pm, time of service. In lieu of flowers, donations may be made to the Leukemia Society or to the American Heart Association, c/o Cheatham County Funeral Home 615-792-2552 cheathamcountyfh.com

The family of Sonya Rene' Elliott created this Life Tributes page to make it easy to share your memories.