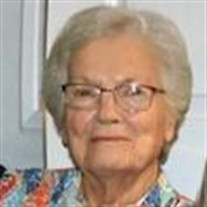 JENNETTE, Shirley Ann, age 84, passed away on Saturday, November 30, 2019, at Centennial Medical Center in Nashville, Tennessee. She was born in Charlotte, Tennessee, to the late James Norris and Era Louise Jones Lovell. She was a Charlotte... View Obituary & Service Information

The family of Shirley Ann Jennette created this Life Tributes page to make it easy to share your memories.

Send flowers to the Jennette family.