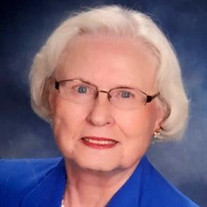 Sally Ruth Gibbs Wherry died on April 19, 2018 at home with her loving family in Hermitage, Tennessee. Sally Ruth was the daughter of Edgar and Lizzie Mai Gibbs, and the youngest and the last surviving member of their thirteen children. A native of Ashland City, Tennessee, Sally received a B.S. in Home Economics from Tennessee Technological University, and a Master’s Degree in Guidance Counseling from East Tennessee State University. She also attended a teaching program at Peabody College at Vanderbilt University. As well, she completed postgraduate work at ETSU, University of Tennessee, University of Kentucky, and University of Virginia. From 1954-1964, Sally Ruth taught math and science for students ranging from junior high to high school. In 1964, she was asked to work as a guidance counselor, where it seems she found her calling. It was then, working fulltime, that she returned to school to get her Master’s of Arts Degree in Guidance Counseling. At Tennessee High School, she was assigned to direct Project Transition, which was designed to improve programs and curriculum for students transitioning through the school system. She served as Chair of System Pupil Personnel, Chair of Secondary Standardized Testing, served on the Legislative Committee for Bristol Tennessee Education Association, and as President of the local, district and state Personnel and Guidance Association. She also planned the District TEA Guidance Clinic, served on state and national convention-planning committees and presented interest sessions at conventions. Sally Ruth also led teacher-in-service groups on interpersonal relationships in the classroom. Later in her career, she became Director of Guidance at Central High School in McMinn County. In 1981, Sally moved to Chicago to be closer to her daughters and became a licensed real estate agent. She later returned to Tennessee, became licensed in real estate there, and enjoyed sales in both states. Meanwhile, she continued to take psychology classes and certification exams in her quest to always learn more and stay current. In 1991, Sally worked as a Bereavement Counselor for Hospice of the North Shore and became a Licensed Clinical Professional Counselor in both Illinois and Tennessee. She led bereavement groups and groups for those separated and divorced through her Church, later opening her own private practice. Sally Ruth’s greatest joy was her family; she is survived by her three children: Robert Emmet Wherry, Jr. of Santa Monica, CA and Brooklyn, NY; Cynthia Wherry Nash of Hermitage, Tennessee; and Sandra Wherry Kruckman of Libertyville, Illinois. She is also survived by six of her seven grandchildren: Francis Kutten Nash of Concord, MA; David Andrew Nash of Los Angeles, CA; Mallory Kruckman Schmoll, of Louisville, KY; Hanna Gibbs Kruckman of Minneapolis, MN; Lucas Edgar Wherry and Olivia Dora Wherry of Brooklyn, NY. She was predeceased by her grandson Charles Edgar Nash, who passed away in 2016. Sally Ruth was also blessed with five great-grandchildren: Bella Nash of Northfield, IL; Ivy, Violet, and Sienna Nash of Concord, MA; and Nora Grace Schmoll of Louisville, KY. Private services were held in her hometown of Ashland City, Tennessee. Donations in her name may be sent to: Misericordia Heart of Mercy Home in Chicago, Illinois, at https://www.misericordia.com, account #6169.

Sally Ruth Gibbs Wherry died on April 19, 2018 at home with her loving family in Hermitage, Tennessee. Sally Ruth was the daughter of Edgar and Lizzie Mai Gibbs, and the youngest and the last surviving member of their thirteen children. A native... View Obituary & Service Information

The family of Sally Ruth Gibbs Wherry created this Life Tributes page to make it easy to share your memories.

Send flowers to the Wherry family.