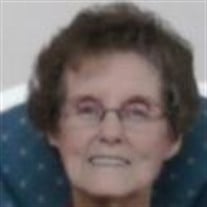 ELLIOTT, Ruth “Nana” Roberts, age 94, passed away on Sunday, March 6, 2016, at her home. Ruth was born near Carthage, Tennessee, on April 11, 1921, to Wid David Roberts and Mattie Haynie Roberts. She was formerly a resident of Ashland City, Tennessee, before locating to Franklin, Tennessee. Ruth was a member of Bethlehem FreeWill Baptist Church in Ashland City, Tennessee, and a former member of Trinity FreeWill Baptist Church in Nashville, Tennessee. She attended business school at Draughon’s Business College and worked as a bookkeeper for over 25 years at Tennessee Sheet Metal alongside her husband of almost 72 years, William “Bill” E. Elliott. She is preceded in death by her parents; her husband, William “Bill” E. Elliott; her son, Billy Wayne Elliott; two sisters; two brothers; and a granddaughter, Angela Dawn Elliott. She is survived by her son, Ronnie (Pam) Elliott of Franklin, Tennessee; daughter, Marilyn (Carlos) De La Fuente of El Paso, Texas; 4 grandchildren and 9 great-grandchildren. Funeral service will be Wednesday, March 9, 2016, at 10am in the Chapel of Cheatham County Funeral Home with Brother Randy Corn officiating. Burial will follow in Bethlehem Cemetery in Ashland City, Tennessee. The family will receive friends on Tuesday, March 8, 2016, from 4pm to 8pm and on Wednesday from 8am until service hour of 10am. In lieu of flowers, donations in Ms. Elliott’s memory may be made to Bethlehem FreeWill Baptist Church in Ashland City, Tennessee, c/o of Cheatham County Funeral Home. Cheatham County Funeral Home 615-792-2552 cheathamcountyfh.com

The family of Ruth "Nana" Roberts Elliott created this Life Tributes page to make it easy to share your memories.