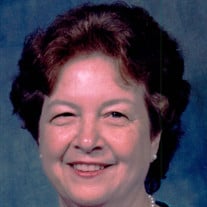 Mrs. Ruby Ann Stockhoff Hickox, 79, of Ashland City, Tennessee, formerly of Douglasville, Georgia passed away Sunday, August 6, 2017 at Hillcrest Healthcare Center in Ashland City, Tennessee. She was born February 12, 1938 in Seymour, Indiana the daughter of the late Mr. Herman H. Stockhoff and the late Mrs. Betty Mahoney Kasting. She retired from the Registrar’s Office at Gordon College in Barnesville. She was an active member of Marvin Methodist Church in Barnesville, Georgia for many years. The anchor of her family, she was a loving caretaker to others, a beloved wife, mother, grandmother, and great-grandmother. She was an avid reader and loved country music. In addition to her parents, she was preceded in death by her beloved husband, Walter Marvin Hickox on September 6, 2008. She is survived by her daughters and a son-in-law, Cheryl and Alan Fainn of Douglasville, GA and Lisa Tersinar of Nashville, TN; a son and daughter-in-law, Marvin William and Chong Hickox of California City, CA; brother and sister-in-law, Harold and Shirley Stockhoff of Knoxville, TN; six grandchildren, Charles Hamlin of Sharpsburg, GA, Niki Brown of Dickson, TN, Lori Daggs of California City, CA, Jonathan Hickox of Nashville, TN, Brandy Hill of Buford, GA, and Shawn Fainn of Douglasville, GA; seven great-grandchildren, David Brown, Kaylee Brown, Kaitlyn Brown, Kayli Dubois, Jeffrey Elliott, Cassidy Elliott, and Piper Hill; sisters-in-law, Annie Grace Rowe of Jacksonville, FL and Derrell Baggs of Middleburg, FL; several nieces and nephews also survive. The family will receive friends at Jones-Wynn Funeral Home in Douglasville, Thursday, August 10, 2017 from 4:00 PM until 8:00 PM. Funeral Services will be conducted Friday, August 11, 2017 at 1:00 PM at the Chapel of Jones-Wynn Funeral Home in Douglasville. Interment will follow at Forest Lawn Memorial Gardens in College Park. In lieu of flowers, contributions in memory of Mrs. Ruby Hickox may be made to the charity of your choice. Messages of condolence to the family may be sent at www.jones-wynn.com. Jones-Wynn Funeral Home & Crematory of Douglasville is in charge of arrangements. 770-942-2311

The family of Ruby Ann Stockhoff Hickox created this Life Tributes page to make it easy to share your memories.

Send flowers to the Hickox family.