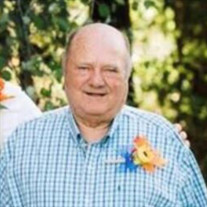 Roscoe Granville Lain, age 83, passed away at his home in Ashland City, Tennessee on Wednesday, April 13, 2022. He was born on October 14, 1938. Roscoe founded Lain’s Tree Service Inc. in the 1950s. The company is still going strong with second and third generation. He was a man of many hobbies and lived life to the fullest. Roscoe is preceded in death by his parents, Frank and Dorothy (Towns) Lain; wife, Edie Frances Lain; and sisters Linda, Bobbie, and Rita. He is survived by his brothers, Ricky, Jimmy, Ronnie, and David; sister, Carolyn; stepson, Jeff (Melody) DeRossett; daughters, Debbie Lain and Tabitha Myers; stepdaughters, Debbie (Trey) Johnston, Donna, and Glenda (Don) Pewit; and other extended family members including fourteen grandchildren and eighteen great-grandchildren. A memorial service will be held in the chapel of Cheatham County Funeral Home on Friday, April 22, 2022 at 6pm with Randy Clark officiating. Visitation will be Friday, April 22, from 3pm until the hour of service. Cheatham County Funeral Home 615-792-2552 online condolences at cheathamcountyfh.com

The family of Roscoe Granville Lain created this Life Tributes page to make it easy to share your memories.

Roscoe Granville Lain, age 83, passed away at his home in Ashland...

Send flowers to the Lain family.