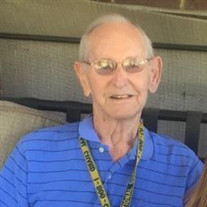 ROBERT DEWEL PERRY, age 88, passed away at his home on Saturday, August 26, 2017. Robert was born in Cheatham County, Tennessee, on September 16, 1928, to the late Norman Perry and Lura Mai Russell Perry. He was a United States Navy Veteran, as well as a Veteran of the Army National Guard. Robert, along with his late wife, Luella Read Perry, were members of the Ashland City United Methodist Church. He attended University of Tennessee Engineering School and worked and retired from Eastman Kodak as a regional manager. Robert was very well-known to everyone. He was a member of the Ashland City Lion’s Club, a Mason, a member of the Civitan Club, Boy Scout Leader, active in the American Legion, Cheatham County School Board, served as foreman for the grand jury, was a founding member of the Cheatham County Library and a member of the Cheatham County Library Board, the Advisory Board for Community Bank, and helped initiate the beginning of the Assisted Living Center in Ashland City. Robert had many hobbies, including gardening, painting, wood carving, and self-taught himself to use his computer. Robert is preceded in death by his parents; wife of 67 years, Luella Read Perry and sister, Maxine Perry. He is survived by his son, Robert “Bob” N. Perry; daughter, Linda (Phil) Lou Saliba; grandchildren, Robert Calvin “Cal” Perry, Michelle (Paul) Saliba Helle, Melissa (Justin) SalibaTucker, and Christie (Brian) Saliba George; and great-grandchildren, Brayden and Brooklyn Helle and Autumn Grace George; and his beloved pet, Brownie. Funeral service will be Saturday, September 2, 2017, at 1pm in the Chapel of Cheatham County Funeral Home with Paul Robert Gupton officiating. Burial will follow in Bethlehem Cemetery in Ashland City, Tennessee, with military honors. Visitation with the family will be Friday, September 1, 2017, from 4pm to 8pm and on Saturday from 10am until service hour of 1pm. In lieu of flowers, donations in Robert’s memory may be made to The American Legion for Cheatham County or Southern States Police Benevolent Foundation c/o Cheatham County Funeral Home 615-792-2552 cheathamcountyfh.com.

ROBERT DEWEL PERRY, age 88, passed away at his home on Saturday, August 26, 2017. Robert was born in Cheatham County, Tennessee, on September 16, 1928, to the late Norman Perry and Lura Mai Russell Perry. He was a United States Navy Veteran,... View Obituary & Service Information

The family of Robert Dewel Perry created this Life Tributes page to make it easy to share your memories.

ROBERT DEWEL PERRY, age 88, passed away at his home on Saturday,...