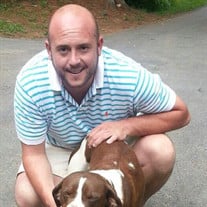 ROBERT CALVIN “CAL” PERRY, age 36, passed away on September 30, 2017, at Vanderbilt University Medical Center in Nashville, Tennessee. Cal was born in Nashville, Tennessee, on June 4, 1981, to Robert N. Perry and Susan Hutton Semans. Cal was a graduate of Dickson County High School Class of 1999. He worked in the food industry as a chef. He is survived by his parents, Robert “Bob” N. Perry and Susan H. Semans (Allen) and his beloved dog, General. Funeral service will be Thursday, October 5, 2017, at 1pm in the Chapel of Cheatham County Funeral Home with Pastor Terry Bailey officiating. Burial will follow in Bethlehem Cemetery in Ashland City, Tennessee. The family will receive friends on Wednesday, October 4, 2017, from 3pm to 7pm and on Thursday, October 5th from 11am until service hour of 1pm. Serving as pallbearers will be Steven Hudson, Clint McGee, Taylor Smith, Jason Norris, Chas Osborn, and Keith Hutton. In lieu of flowers, donations in Cal’s memory may be made to the Dickson County Humane Association or the charity of your choice c/o Cheatham County Funeral Home 615-792-2552 cheathamcountyfh.com

The family of Robert Calvin "Cal" Perry created this Life Tributes page to make it easy to share your memories.