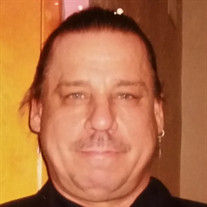 DOZIER, Rexall “Rex” Wayne, age 58, passed away at Centennial Medical Center in Nashville, Tennessee, on Monday, May 16, 2016. He was born in Raytown, Missouri, on August 6, 1957, to Arnold Dozier and Mary Ellen Newland Dozier. He worked as a truck driver and welder, most recently for T&W Steel. He is preceded in death by his mother Mary Ellen Dozier and wife, Marsha Dozier. He is survived by his father, Arnold Dozier; daughter, Elizabeth (Fredrick III) Gulley; brother, Ray (Jenifer) Dozier; and two grandchildren, Fredrick IV and Mason Gulley. Funeral service will be Saturday, May 21, 2016, at 2pm in the Chapel of Cheatham County Funeral Home. Burial will follow in Newland Cemetery in Ashland City, Tennessee. The family will receive friends on Friday, May 20, 2016, from 3pm to 7pm and on Saturday from 11am until service hour of 2pm. Cheatham County Funeral Home 615-792-2552 cheathamcountyfh.com

The family of Rexall "Rex" Wayne Dozier created this Life Tributes page to make it easy to share your memories.

Send flowers to the Dozier family.