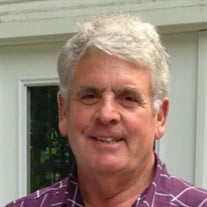 Randall &#8220;Randy&#8221; William Waynick, age 63, passed away on March 16, 2021, at The Residence at Alive Hospice surrounded by his family. Randy was born in Ypsilanti, Michigan, to the late Elza W. and Veronia Williams Waynick. He was... View Obituary & Service Information

The family of Randall "Randy" William Waynick created this Life Tributes page to make it easy to share your memories.

Send flowers to the Waynick family.