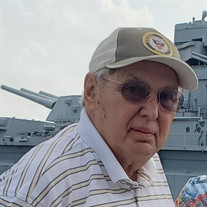 Paul Alfred Fine Jr., 74 years old, passed away peacefully at his home in Charlotte, TN surrounded by family on December 10, 2020 following a battle with cancer. Paul was born on November 06, 1946 in Tulsa, Oklahoma to Paul A Fine and Ruby McMurtry Fine. He graduated from Davis High School in Davis, OK in 1965, then attended East Central University in Ada, OK, where he earned a Bachelor of Science in Business in 1969. Immediately upon graduation, Paul joined the United States Navy, where he served on active-duty for four years during the Vietnam War. Paul graduated from special training at the Great Lakes Naval Station in Illinois later in 1969 and was then deployed to San Diego, CA. Paul served as an Operation Specialist 3rd Class; he completed 3 West-Pac cruises to Vietnam during his four years of service. He served first on the DDG-12 U.S.S. Robison from 1970-1971, then transferred to the DD-945 U.S.S. Hull where he served from 1972-1973. He was discharged with full honors from the U.S. Navy in July of 1973. Paul married Sandra Lee Thomas on February 10, 1973 in Davis, OK. Together they raised two sons: Jesse Paul Fine and Jon Matthew Fine. After completing his naval career, Paul worked as a lithographer for many years. He was an avid artist and cartoonist, and also took great interest in his sons’ musical pursuits. Paul was preceded in death by his grandparents and parents. He is survived by his wife Sandra Fine of Charlotte, TN; son Jesse Fine and wife Kamatha and their two sons, Foster and Fox of Charlotte, TN; son Matt Fine and wife Lori and their two daughters, Kate and Elliott of Franklin, TN; brother Russell Fine and wife Sharon of Davis, OK; and sister Patti Martin and husband Van of Yukon, OK as well as nieces and nephews and other relatives. Paul’s life will be celebrated with full military honors and a naval burial at sea. Cards to the family may be sent in care of Sandra Fine to: 1240 Old Lock A Rd, Charlotte, TN 37036 Cheatham County Funeral Home 615-792-2552 online condolences cheathamcountyfh.com

Paul Alfred Fine Jr., 74 years old, passed away peacefully at his home in Charlotte, TN surrounded by family on December 10, 2020 following a battle with cancer. Paul was born on November 06, 1946 in Tulsa, Oklahoma to Paul A Fine and Ruby... View Obituary & Service Information

The family of Paul Alfred Fine Jr. created this Life Tributes page to make it easy to share your memories.

Send flowers to the Fine family.