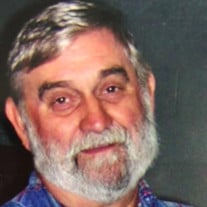 ROBERT MICHAEL “Mike” LOCKERT, age 72, passed away on Monday, November 13, 2017. Mike was born in Nashville, Tennessee, on October 29, 1945, to the late William Bradley Lockert and Mary Hazel Perry Lockert. Mike was a member of the Ashland City High School Class of 1964 and received a Bachelor’s Degree from the University of Tennessee-Knoxville. Mike was a Veteran of the Army National Guard. He will be remembered by his colleagues and students from his 30+ years of teaching at Cheatham County Central High School and Sycamore Junior High, and as the Cheatham County Vocational Director. He was an avid sports fan, especially to his Cheatham County Cubs and University of Tennessee athletics. He was a devoted family man and farmer. He is preceded in death by his parents: William Bradley and Mary Hazel Perry Lockert; twin infant sons; three brothers, W.B. Lockert, Jimmy Lockert, and Lopez Lockert; and one sister, Ann Fields. He is survived by his wife of 49 years, Carolyn Jackson Lockert; four children: Marcie (Larry) Ridley, Kelly (Jason) Lewis, Melissa (Scott) Lain, and Will (Ashley) Lockert; 11 grandchildren, Victoria, Anthony, Emma Beth, Jackson, Analee, Kira, Aidan, Katelyn, Liam, Loghan, and Lynnley; and one sister, Faye McDonald. Funeral service will be Saturday, November 18, 2017, at 10am in the gymnasium of Cheatham County Central High School with Jake Lockert officiating. Burial will follow in Lockert Family Cemetery in Ashland City, TN. Visitation with the family will be Thursday, November 16th at the funeral home from 3pm to 7pm and on Friday, November 17th at the funeral home from 11am until 7pm and on Saturday at the CCCHS from 9am until service hour of 10am. Active pallbearers will be Jake Lockert, Perry Lockert, James Lockert, Shawn Lockert, Eric Lockert, Ricky Young, Chris Young, Tony Young, and Brad Fields. Honorary pallbearers are Robert Hester, Les Binkley, Bryce Sanders, Murray Neal, Jack Morton and Dale Brinkley. In lieu of flowers, donations in Mike’s memory may be made to CCCHS – CTE Department c/o Cheatham County Funeral Home 615-792-2552 cheathamcountyfh.com.

The family of Mike Lockert created this Life Tributes page to make it easy to share your memories.

Send flowers to the Lockert family.