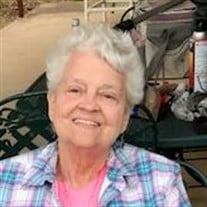 HUNNELL, Melva M., age 81, passed away on Thursday, December 20, 2018, surrounded by her loving family. Melva was born in Columbus, Ohio, on May 28, 1937, to the late Alton Summerfield Parker and Beulah Miller Parker. She worked as a shipping... View Obituary & Service Information

The family of Melva M. Hunnell created this Life Tributes page to make it easy to share your memories.

Send flowers to the Hunnell family.