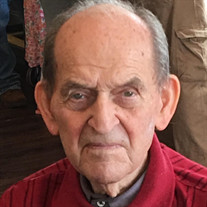 MAURICE KNIGHT, age 83, passed away on Thursday, August 18, 2016, at Vantage Pointe Senior Living in Ashland City, Tennessee. Maurice was born in Montgomery County, Tennessee, on July 7, 1933, to Ardell Knight and Hettie Darnell Knight. Maurice was a member of Tusculum Church of Christ. He worked as a housekeeping manager for Vanderbilt Medical Center, Tusculum church, and Lipscomb University until his retirement. He also owned his own janitorial company for many years. Maurice’s main hobbies were working, and teaching his sons to work. He liked vanilla ice cream, snickers bars, mowing grass, growing tomatoes, and supervising work to be sure it was done right. He loved his family, helping others, honesty, and a job well done. His last two wishes were that his sons always get along, and that all his family will go to Heaven. He was a good man who built his life on hard work, common sense, helping others, loving his family, and loving his God. He is preceded in death by his parents, Ardell and Hettie Knight; wife, Betty Knight; and brother, Doris Knight. He is survived by his sons, Danny (Patricia) Knight and Ronald (Pamela) Knight; his brother-in-law and best friend Bobby Atkins, four grandchildren Ashley, Cameron, Jessie, and Kelley; and six great-grandchildren. Funeral service will be Monday, August 22, 2016, at 1pm in the Chapel of Cheatham County Funeral Home with Bro. Bill Peach officiating. Burial will follow in Joelton Hills Memory Gardens in Joelton, Tennessee. The family will receive friends on Sunday, August 21, 2016, from 1pm to 8pm and on Monday, August 22, 2016, from 10am until 1pm. Instead of flowers the family requests donations be made to the Churches of Christ Disaster Relief Inc. c/o Cheatham County Funeral Home, 117 Elizabeth St. Ashland City, TN 37015 615-792-2552 cheathamcountyfh.com

The family of Maurice A. Knight created this Life Tributes page to make it easy to share your memories.

Send flowers to the Knight family.