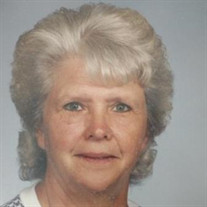 MARY (JEAN) COLE, age 80, passed away on December 23, 2018, at her home surrounded by her loving family. Jean lived a very full life as a mother of 8, grandmother to 31 and great-grandmother to 43. She was born January 26, 1938, in Tazewell, TN, and moved to Indiana in her early years. After her marriage to Arion Cole in 1971, they moved to Battle Ground, IN, until 1977 where they relocated to Ashland City, TN. Jean is preceded in death by her parents, Lewis Estille Poore of Monroe, MI, and Cretie Izetta Zink of Tazewell, TN; a young daughter, Sheila; daughter, Janet Mayo; grandsons, Jeff Harvey, Bradley Krantz, infant Clinton Delph; brother, LeRoy Turner. She is survived by her husband of 47 years, Arion Cole of Ashland City, TN; children, Cindy (Duane) of Rose Hill, VA, Scott (Doneda) of Hastings, FL, Bob (June) of New Tazewell, TN, Fritz (Sharon) of Fayetteville, TN, Lisa (Kevin), Denise (Billy) both of Ashland City, TN and LuAnn (Tim) of Charlotte, TN; 3 sisters, Pearl of Lafayette, IN, Clara of New Tazewell, TN, and Barbara of Delphi, IN; 1 brother, Colonel Lew Poore of Carmel, IN; along with several nieces and nephews. Funeral service will be Thursday, December 27, 2018, at 1pm in the Chapel of Cheatham County Funeral Home with Randy Hester officiating. Burial will follow in EverRest of Cheatham, LLC, in Pleasant View, TN. The family will receive friends on Wednesday, December 26th from 2pm to 6pm and on Thursday before the service from 10am until service hour of 1pm. In lieu of flowers, the family requests donations to the Alzheimer’s Foundation c/o Cheatham County Funeral Home 615-792-2552 cheathamcountyfh.com

The family of Mary (Jean) Cole created this Life Tributes page to make it easy to share your memories.

Send flowers to the Cole family.