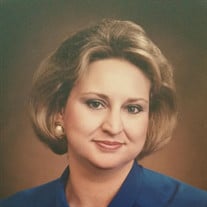 MARTHA “NICKI” OWEN SANDERS, age 70, passed peacefully on Tuesday, June 19, 2018, at The Residence at Alive Hospice in Nashville, Tennessee. She was born October 31, 1947, to the late William “Billy” and Martha “Cotton” Owen. Nicki was a member of the Cheatham County High School Class of 1965 and graduated with a Bachelor’s Degree from Trevecca Nazarene University. She retired from the State of Tennessee Department of Safety. She is survived by her three children: Will, Laura, and Rachel Sanders; sister, Fran Owen; two grandchildren, Phillip and Owen Sanders; and companion, Jim Jones. Funeral service will be Friday, June 22, 2018, at 11am in the Chapel of Cheatham County Funeral Home with Rev. Penny Stratton officiating. Burial will follow in Forest Hill Cemetery in Ashland City, TN. The family will receive friends on Thursday, June 21st from 3pm to 8pm and on Friday, June 22nd, from 10am until service hour of 11am. Serving as active pallbearers will be John Nicholson, Nick Nicholson, Steven Stratton, Joe Roberts, Lee Spann and Otis Nichols. Honorary pallbearers are Dave Wallace, Terry Powell, Jim Jones, Ken Elam, Larry Ramsey and Doug Snyder. In lieu of flowers, donations in memory of Nicki may be made to Alive Hospice c/o Cheatham County Funeral Home 615-792-2552cheathamcountyfh.com

The family of Martha "Nicki" Owen Sanders created this Life Tributes page to make it easy to share your memories.

Send flowers to the Sanders family.