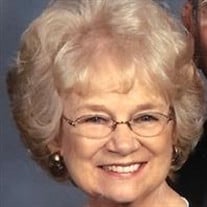 Marilyn June Gupton, age 87, passed away peacefully on Saturday, October 19, 2019, surrounded by her loving family, at The Waters of Cheatham Nursing Home in Ashland City, TN. She was born in Kentucky to Marvin and Dorothy Crenshaw, and was... View Obituary & Service Information

The family of Marilyn J Gupton created this Life Tributes page to make it easy to share your memories.

Send flowers to the Gupton family.