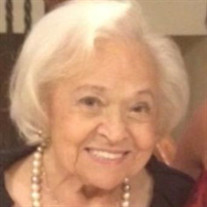 Louise Regina (Malocu) Swan July 7, 1920 – January 9, 2020 Louise Swan, 99 lovingly known as “Grandma” to so many, peacefully passed away on Thursday, January 9th at The Residence at Alive Hospice in Nashville, Tennessee with her granddaughters, Lynette, Michelle and Tressa, praying by her side. Louise resided with her son, George and his wife Cheryl for the past 2 years in Ashland City, TN where she loved attending The Ashland City Senior Center to exercise while playing Bingo “Bingosize” on Fridays with her son and other seniors in the community. Prior to that, she lived in Maryland for 45 years (6 of those in Rhode Island) sharing her time between the homes of her daughter’s and grandchildren’s homes. She was born in Hazleton, Pennsylvania and was the fifth of seven children born in the United States to immigrant parents from Italy. Louise was raised from the age of 3 at St. Joseph’s Orphanage in Scranton, PA along with her sister Angie. She later returned to Hazleton where the Schiavo family welcomed her. Louise often spoke of her fond memories with the Schiavo family and continue to stay in touch with her “little sister” Judy. She received her high school diploma from La Salle Extension University, accredited by the National Home Study Council. She completed the Nurse’s Aide Program and became employed by the Prince George’s Community Hospital in Cheverly, MD where she worked as a Nurse’s Aide and then a ward clerk for 22 years before her retirement. Louise was preceded in death by her parents, Michael and Anna Maria (Talerico) Malocu; her brothers Anthony and Frank; sisters, Mary, Rita, Jane and Angie; and her daughter, Sharon Orange. She is survived by her son George N. (Cheryl) Swan of Ashland City, TN; her daughter Paulette (Len) Fasick of Bowie, MD; her granddaughters, Lynette (Donald) Entzian of Lothian, MD; Michelle (Chris) Nolan of Mount Airy, MD; Tressa (Mike) Suiters of Ashland City, TN; Stephanie (Rick) Jenkins of Bowie, MD; Jennifer Fasick of Waldorf, MD; grandsons, Lenny Fasick of Baltimore, MD; Steven (Melissa) Orange of Chesapeake Beach, MD; Pete Heathman of Ashland City, TN; along with many great-grandchildren: Cassie, John, Savannah, Mackenzie, DJ, Sammy, Chance, Ashley H., Ashley M., Alex, Andrew, Emma, Dylan, Christine, Sarah, Nathan, and Jason. Louise was a tiny Italian lady standing only 4’6 and 1/2 ” (she was very proud of that ½ inch). What she lacked in size, she often made up in sass and wit. She taught all her grandchildren to play chess and could often be found working a Sudoku puzzle. She was a loving mother, grandmother and great-grandmother to her family. She and her late sister Angie loved the Washington Redskins and could be found in front of the television on game days hooting and hollering until they would finally break out into song “Hale to the Redskins.” Her family would like to offer a special thanks to all the doctors, nurses and aides who took wonderful care of her at the Sarah Cannon Cancer Center at TriStar Centennial Hospital and The Residence at Alive Hospice in Nashville, TN during her final hours. A viewing is planned at the Cheatham County Funeral Home in Ashland City, Tennessee on Friday, January 10th from 3:00pm - 7:00pm, as well as an additional viewing and service at the Lee Funeral Home Calvert, 8200 Jennifer Lane, Owings, Maryland, 20736 on January 21st at 1pm with Robert Hahn officiating. Family will receive friends at the funeral home before the service from 11am until service hour of 1pm. A private burial is planned at the Southern Memorial Gardens in Dunkirk, MD. Cheatham County Funeral Home 615-792-2552 on-line condolences at www.cheathamcountyfh.com

The family of Louise Regina Malocu Swan created this Life Tributes page to make it easy to share your memories.