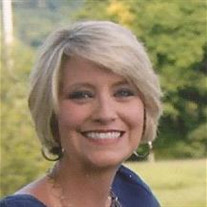 PULLEY, Leanne, age 39, passed away on November 14, 2015, at her home after a long illness. She was born October 17, 1976, in Nashville, Tennessee, to Donald Gurley and Peggy Inman Gurley. She worked as a mortgage underwriter for First State Mortgage and coached cheerleading for Cheatham County Central High School in Ashland City, Tennessee. Beyond her dedication to the CCCHS Cheer Team, Leanne was a loving daughter, wife and mother with a caring and kind spirit. Her battle with breast cancer displayed her determination, courage and unwavering faith, making her an inspiration to many in her community. Her friends will remember her contagious smile, her “never quit/no excuses” attitude and beauty both inside and out. She is preceded in death by her grandmother, Anne McLaughlin; grandfather, Jesse Inman and wife Mae Inman; and brother, Jackie Gurley. She is survived by her parents; her husband, Darrell Pulley; daughter, Sarah Elizabeth Pulley and sisters, Tami Terrell (Randy) and Ginger Gurley; and nieces, Jennifer Arsenault, Kelsie Krantz and Lacie Reynolds, and nephew, Ryan Terrell. Funeral service will be Thursday, November 19, 2015, at 1pm in the Chapel of Cheatham County Funeral Home with Brother David Royalty officiating. Burial will follow in Bearwallow Church of Christ Cemetery in Ashland City, Tennessee. The family will receive friends on Wednesday, November 18, 2015, from 11am until 8pm and on Thursday from 9am until service hour of 1pm. Serving as pallbearers will be Gary Clouse, Ricky Clouse, Randy Terrell, Greg Cannon, Bruce Myers and Drew Pulley. Honorary pallbearers are the 2012-2015 Cheatham County High School Cheerleaders. In lieu of flowers, donations in Leanne’s memory may be made to the Nashville Rescue Mission, 639 Lafayette St, Nashville, TN 37203 or Alive Hospice, 1718 Patterson Street, Nashville, Tennessee 37203. Cheatham County Funeral Home cheathamcountyfh.com

PULLEY, Leanne, age 39, passed away on November 14, 2015, at her home after a long illness. She was born October 17, 1976, in Nashville, Tennessee, to Donald Gurley and Peggy Inman Gurley. She worked as a mortgage underwriter for First State... View Obituary & Service Information

The family of Leanne Pulley created this Life Tributes page to make it easy to share your memories.

Send flowers to the Pulley family.