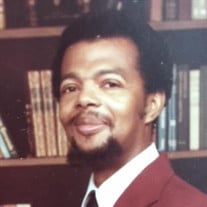 Mr. Kenneth Sterling, age 69, passed away on Wednesday, September 21, 2016. He was born in York County, South Carolina, on January 4, 1947, to Wendell B. Houston and Lula Sterling Parker. He worked as a chef for David Lipscomb College, The... View Obituary & Service Information

The family of Kenneth Sterling created this Life Tributes page to make it easy to share your memories.

Send flowers to the Sterling family.