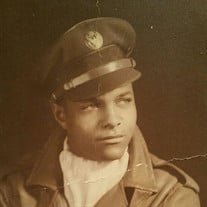 COBB, Joe A., Sr., age 85, passed away Tuesday, September 1, 2015. He was born to the late George Rufus and Daisy Milo Cobb, May 30, 1930, one of eight children. “Jew Boy” (as he was affectionately known) graduated from G W Carver High School in Pine Tops, North Carolina, in 1949. Joe enlisted in the USAF after graduation and was honorably discharged in 1955. He attended and graduated from TSU where he met Martha Elizabeth Jones and they married November 11, 1960. They moved to Maryland and had four children. In 1961, he began working for FHA, and with NASA in 1962. In 1963, Joe began working for the VA in Washington, D.C. In 1970, he moved his family back to Tennessee and settled in Cheatham County and continued working for the VA until he retired in 1984. Joe and Martha worshipped at St. Martha’s Catholic Church in Ashland City, TN. Joe was preceded in death by his wife, Martha E. Cobb; his parents; and six brothers, Robert Lee, George Rufus, Jr., Booker T., Hilton, John, and Donnell Cobb. He is survived by his sister, Mary Cobb Jenkins (Wilbert) of Winston-Salem, NC; two sons, Joe A. Cobb, Jr. and Anthony B. Cobb (Latifah); two daughters, Renee L. Cobb and Mary E. Cobb Thomas; grandchildren, Michael E. Sadler, Janay A. Cobb, Cavelle C. Rondo, Mechelle L. Thomas, Saniyah R. and Zoe’ I. Cobb; great-grandchildren, Ja’Manii, Ja’Niiyah, and Ja’Vieonn Cobb; and a host of nieces and nephews and lifelong friends. His service will be Tuesday, September 8, 2015, at 11:30 a.m. at St. Martha’s Catholic Church, with Rev. Peter Do Quang Chau officiating. Burial will follow in the Middle Tennessee Veterans Cemetery at 2:00 p.m. Visitation with the family will be at the Cheatham County Funeral Home on Monday, September 7th, from 6:00 p.m. – 8:00 p.m., with a Rosary at 7:00 p.m. Cheatham County Funeral Home in charge of arrangements cheathamcountyfh.com

The family of Joe A. Cobb Sr. created this Life Tributes page to make it easy to share your memories.

Send flowers to the Cobb family.