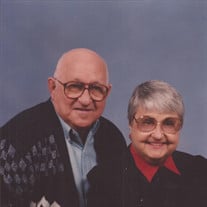 Jean Frances Ruth Morris, 90, of Ashland City passed away August 20, 2015. She was born to Swan and Anna Olson on their farm near Wausa, Nebraska on July 2, 1925. Her parents both immigrated from Sweden and embraced American citizenship. She was preceded in death by her parents, five brothers, and three sisters. Jean was married for 13 years to Don Beeks of Wayne, Nebraska and for 47 years to George Morris of Ashland City. Both preceded her in death. She is survived by two daughters, Danita (Mark) Eldridge and Jeannine (Michael) Crowell; five grandchildren, Bethany, Anna, and Jillian Eldridge, Tyler and Madison Crowell; sister, Fern Fischer of Columbus, NE; brother, Les Olson of Salem, OR; and many nieces and nephews. Jean graduated from Wausa State Teachers College and began her career in education teaching multiple grades in a rural school in Nebraska. She ventured to Merced, CA after the death of her first husband and continued teaching elementary school. While there she met and married Mr. Morris. He brought her to his childhood home in Ashland City upon his military retirement. Jean taught fifth and sixth grades at Ashland City Elementary School and was a guidance counselor at Cheatham Central and Sycamore Middle Schools until her retirement in 1990. Her teaching career spanned 45 years with 25 of those dedicated to Cheatham County students. Jean was a dedicated member of the Ashland City United Methodist Church and the United Methodist Women, Centre Star Order of the Eastern Star, and the Cheatham County and Tennessee Retired Teachers Associations. Visitation with the family will be at the Cheatham County Funeral Home on Saturday, August 22, from 3:00 until 6:00 p.m. The family will receive visitors on Sunday, August 23, from 1:00 p.m. until the funeral hour at 3:00 p.m. with Rev. Loyd Mabry officiating. Burial will be in the EverRest Cemetery. Memorials may be made to the United Methodist Women’s ministry of the Ashland City United Methodist Church. Cheatham County Funeral Home In Charge of arrangements

Jean Frances Ruth Morris, 90, of Ashland City passed away August 20, 2015. She was born to Swan and Anna Olson on their farm near Wausa, Nebraska on July 2, 1925. Her parents both immigrated from Sweden and embraced American citizenship.... View Obituary & Service Information

The family of Jean Frances Morris created this Life Tributes page to make it easy to share your memories.

Send flowers to the Morris family.