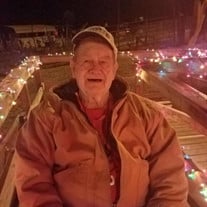 James Ray Sanford, Sr., age 84, passed away on February 2, 2022. He was born in Cumberland City, Tennessee on January 3, 1938. James was an original member of the Cheatham County rescue squad, a former deputy for the Cheatham County Sheriff's... View Obituary & Service Information

The family of James Ray Sanford Sr. created this Life Tributes page to make it easy to share your memories.

Send flowers to the Sanford family.