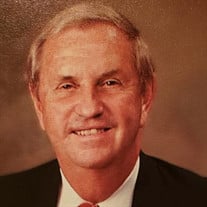 James Luther Reed, age 79, passed away on Monday, September 16, 2019, in Nashville, Tennessee, surrounded by his loving family. Jimmy was born in Cheatham County, Tennessee, on May 25, 1940, the son of Reverend Malcolm Luther and Mable Lucille Sanders Reed. He was preceded in death by his parents and sisters Helen Reed Pace and Darthy Reed Denney. Survivors are his wife, Sue Fizer Reed, daughter Amanda Reed Chambers and husband Greg, son James Carlos Reed, daughter Sarah Reed Cassell and husband Don. He is also survived by four grandchildren, Nicholas, James and Julian Cassell and Anna Chambers. Also survived by brother, Larry Reed and his wife Barbara and sister, Peggy Tackett and her husband Paul. Jimmy graduated from Cheatham County High School in 1958 where he served as Class President. He graduated from Middle Tennessee State University with a Bachelor of Science Degree in Business. Jimmy served two years in the United States Army Armor Division where he attained the rank of First Lieutenant. He was an instructor at OCS in Fort Benning, GA. After being discharged, he served in the TN National Guard for six years. Jimmy began a lifelong career in the Financial Services industry serving many clients. He also served his community as Regional President of the Tennessee Jaycees and Chairman of the Board of Education for Cheatham County. Jimmy was a member of Forest Hills Baptist Church in Nashville, TN, where he served as deacon, choir member and established the Endowment Fund for Missions. Funeral service will be Friday, September 20, 2019, at 11am in the Forest Hills Baptist Church, 2101 Old Hickory Blvd, Nashville, TN 37215, with Chad Mize officiating. Visitation will be Thursday, September 19th, from 5pm to 8pm at Cheatham County Funeral Home and again at the church on Friday, September 20th, from 9am until service hour of 11am. Burial will be Monday, September 23, 2019, at 11am in the Middle Tennessee State Veterans Cemetery in Nashville, Tennessee. In lieu of flowers, donations in Jimmy’s memory may be made to Forest Hills Baptist Church Endowment Fund, 2101 Old Hickory Boulevard, Nashville, TN 37215. Cheatham County Funeral Home 615-792-2552 online condolences may be made at cheathamcountyfh.com

James Luther Reed, age 79, passed away on Monday, September 16, 2019, in Nashville, Tennessee, surrounded by his loving family. Jimmy was born in Cheatham County, Tennessee, on May 25, 1940, the son of Reverend Malcolm Luther and Mable Lucille... View Obituary & Service Information

The family of James L. Reed created this Life Tributes page to make it easy to share your memories.

Send flowers to the Reed family.