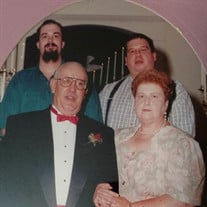 McLEOD, James “Jim” Ernest, age 77, passed away on May 17, 2016, at Select Specialty Hospital in Nashville, Tennessee. He was born on December 22, 1938, in Winston County, Mississippi, to Ernest S. McLeod and Mildred Hickman McLeod. He was a U.S. Air Force Veteran, serving during the Vietnam Conflict. He was a graduate of the University of Tennessee and retired from Baptist Hospital in Nashville, Tennessee, where he worked as a Medical Technologist for 30 years. He is preceded in death by his parents, Ernest S. and Mildred McLeod; and sons, Chris McLeod and Tommy McLeod. He is survived by his wife Barbara Hunt McLeod; sister, Mildred Parker; devoted niece, Karen Hinson; as well as other nieces and nephews. Funeral service will be Thursday, May 19, 2016, at 11am in the Chapel of Cheatham County Funeral Home with Reverend Eric Hinson officiating. Burial will follow in Will Smith Cemetery, in Ashland City, Tennessee, with military honors. The family will receive friends on Wednesday, May 18, 2016, from 3pm to 7pm and on Thursday from 9am until service hour of 11am. Serving as pallbearers will be Bobby Stack, Eliot Hinson, Danny McLeod, Joey McLeod, Robert McLeod, Les Power, Billy Vick and Ricky Lowe. In lieu of flowers, donations may be made to St. Jude Children’s Research Hospital. Cheatham County Funeral Home 615-792-2552 cheathamcountyfh.com

The family of James "Jim" Ernest McLeod created this Life Tributes page to make it easy to share your memories.

Send flowers to the McLeod family.