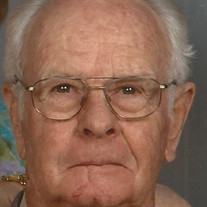 George W. Keeler, Sr, age 91, passed away peacefully at his home on Friday, October 14, 2016. Mr. Keeler was born December 10, 1924, in Nashville, Tennessee, to the late James and Della Mai Zornes Keeler. He was a United States Navy Veteran, serving during WWII. Upon leaving the U.S. Navy, he worked as a lock operator for the Corps of Engineers and upon retirement worked as a security guard for A.O. Smith, formerly State Industries. He is preceded in death by his parents; two brothers; three sisters; and one grandson, Jody Taylor. He was a loving husband, father, grandfather and great-grandfather. He is survived by his wife of 60 years, Mary Rye Keeler; sons, Charlie (Michelle) Taylor of Lenior City, TN, and Chip (Angela) Keeler of Chapmansboro, TN; daughter, Debbie (Patrick) Weatherly of Lenior City, TN; brothers, Earl S. (Rosie) Keeler of Jasper, TN, and Lon (Maybelle) Keeler of Southside, TN; 7 grandchildren; 10 great-grandsons and 1 great-granddaughter. Funeral service will be Monday, October 17, 2016, at 2pm in the Chapel of Cheatham County Funeral Home. Burial will follow in Stewart Cemetery in Ashland City, Tennessee, with military honors. The family will receive friends on Sunday, October 16, 2016, from 4pm to 8pm and on Monday, October 17th from 11am until service hour of 2pm. Nephews will serve as pallbearers. Honorary pallbearers are Bill Jeans, Dan Hunnell and all Sunday School Classes of First Baptist Church of Ashland City. In lieu of flowers, donations may be made in George’s memory to Gideon’s International c/o Cheatham County Funeral Home 615-792-2552 cheathamcountyfh.com

The family of George W. Keeler Sr. created this Life Tributes page to make it easy to share your memories.

Send flowers to the Keeler family.