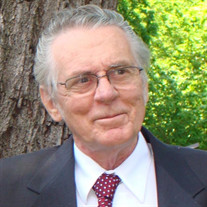 Floyd Eugene Robinson, age 78, passed away Thursday, April 28, 2022, at his home in Ashland City after a lengthy illness. He was preceded in death by his father, Marvin Robinson, mother Georgia (Prewitt) Robinson, and son Steve Eugene Robinson. He is survived by his wife of 62 years, Mary Robinson; daughter Vicki (Tom) Cherry of Coopertown. Grandchildren include Alicia Robinson-Fletcher, Matt (Sarah) Bracey, Crystal Diamond. Great Grandchildren are Delilah, Susie, Scarlett, and Kendall. Brother Larry (Ann) Robinson, sister - Kathy (Norman) Price, Brother- Mike (Jackie) Robinson, sister - Robbie Robinson. Floyd was born on June 16th, 1943, in Corinth, MS. In his younger days, he worked tirelessly as a mechanic in Florence, AL. Later he moved to Detroit, MI where he worked for Ford Lincoln Mercury doing paint and body work. In 1983 he finally found his calling and became the original owner and operator of Riverview Restaurant and Marina which he ran until he retired in 2000. Floyd will be remembered as a loving Christian family man who worked hard all his life. Having completed his mission on this earth, he goes on now to meet his Father in Heaven. Funeral service will be Sunday, May 1, 2022, at 3pm in the chapel with Matt Bracey officiating. Burial will follow at EverRest of Cheatham, LLC in Pleasant View. Visitation will be Saturday, April 30, 2022, from 4pm to 7pm and on Sunday from 1pm until the hour of service of 3pm. Serving as pallbearers will be Johnny Melton, Harris Nicholson, Ted Sparks, Keith Kail, Chip Robinson, and Trey Robinson. Honorary pallbearer will be Randy Harville. Cheatham County Funeral Home 615-792-2552 on-line condolences at www.cheathamcountyfh.com

The family of Floyd Eugene Robinson created this Life Tributes page to make it easy to share your memories.

Send flowers to the Robinson family.