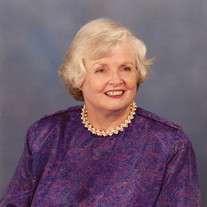 Evelyn Anne Tomlinson, 86, passed away February 3, 2016 in Ashland City, TN. Evelyn was born to the late Anna E. Kraft Tomlinson and Joseph H. Tomlinson, Jr. on August 11, 1929 in Baltimore, MD. Evelyn graduated from Sykesville (MD) High school and attended the University of Maryland where she earned a BA in Education. She later attended the Johns Hopkins Hospital School of Orthoptics to become a Certified Orthoptist. She earned an MA in Teaching from Webster College in 1979. She practiced as an orthoptist in Texas and New York before transitioning into teaching positions at the Medical University of South Carolina, Charleston, SC; the Louisiana State University School of Medicine, New Orleans, LA; and finally the Vanderbilt University Medical Center, Nashville, TN. She was an active member of the American Association of Certified Orthoptists (AACO) serving as president 1975-1976. She loved to travel and was able to combine business with pleasure and was actively involved with the International Orthoptics Association. She loved her work and interacting with patients, particularly pediatric patients. Church was a very important part of her life and she often served as a lay reader. She served as a volunteer in the church office after her retirement. She also loved travel and was accomplished in cross-stitch. Those who knew her were often touched by her kindness, generosity, and sense of humor. Evelyn is survived by nephews, Thomas Gosnell and spouse Evelyn both of Tucson, AZ; Douglas Tomlinson and spouse Julie both of Erie, PA; Richard Tomlinson and spouse Carol both of Fredrick, MD; David Tomlinson of Rochester, NY; and David Eckenboy and spouse Shirley both of Yucaipa, CA. Evelyn will be missed by all of those who knew and loved her. Evelyn was predeceased by her brothers Joseph H. Tomlinson, III and William C. Tomlinson and her sister Patricia Gosnell. The Burial Office with Holy Eucharist will be held Monday Feburary 22 at Christ Church Cathedral, 900 Broadway, Nashville, TN 37203. Visitation will start at 10am with the Burial Office starting at 11am. In lieu of flowers it was Evelyn’s request that contributions be made to The Christ Church Cathedral Memorial Fund. Cheatham County Funeral Home 615-792-2552

The family of Evelyn Anne Tomlinson created this Life Tributes page to make it easy to share your memories.

Send flowers to the Tomlinson family.