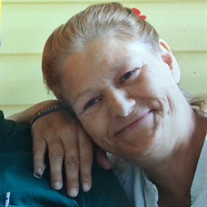 Schubert, Doris Leona, age 57, passed away on December 5, 2016. She was born to the late Leland L Brady, Jr. and Dorothy Best Brady in Nashville, Tennessee on August 14, 1959. She was one of four children. Doris was married to Samuel “Eddie” Schubert and had two sons and one daughter. She was a loving wife and mother and enjoyed her life as a homemaker. Doris was preceded in death by her parents, her brother Leland L. Brady III, sister, Kathy Myers and her nephew, Scotty Brady. She is survived by her sons, Mark Richards (Angela) and Adam Schubert; daughter, Jessica Schubert; brothers, Hubert Brady (Cindy) and Maurice Myers; and 3 grandchildren, Annakayla Rose Browne, Violet Hazel Browne and Ivye Raven Browne. Funeral service will be Thursday, December 8, 2016, at 4:00 pm, in the Chapel of Cheatham County Funeral Home with Brother Timmy Felts officiating. Burial will follow on Friday, December 9th in the Middle Tennessee Veterans Cemetery in Nashville, Tennessee, at 10am. Visitation with the family will be at Cheatham County Funeral Home on Wednesday, December 7, 2016, from 2pm to 7pm and on Thursday from 11am until service hour of 4pm. Family and friends will serve as pallbearers. Cheatham County Funeral Home 615-792-2552 cheathamcountyfh.com

The family of Doris Leona Schubert created this Life Tributes page to make it easy to share your memories.

Send flowers to the Schubert family.