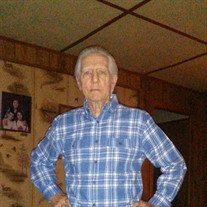 David Leon Bratcher, age 80, passed away at his home in Ashland City, Tennessee, on October 3, 2020, surrounded by his loving family. David was born in Franklin, Kentucky, to the late Samuel Nathan Bratcher and Ruby Pitt Bratcher. He a United... View Obituary & Service Information

The family of David Leon Bratcher created this Life Tributes page to make it easy to share your memories.

David Leon Bratcher, age 80, passed away at his home in Ashland...

Send flowers to the Bratcher family.