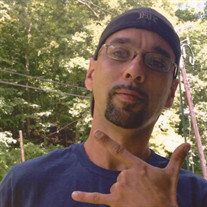 PUCKETT, Christopher “Chris” Glen, age 33, passed away on Saturday, December 12, 2015, at Centennial Medical Center in Nashville, Tennessee. He was born in Nashville, Tennessee, on May 25, 1982, to Dewey Puckett and Geneva McNeese Puckett. He worked in construction. He is preceded in death by his mother. He is survived by his parents, Dewey and Gayle Puckett; sons, Peyton and Chris, Jr.; daughters, Madalyn and Kayla; brother, Ira Young, Jr., (Christie); sisters, Tabitha Puckett-Nelson (Steve Fudge) and Cathey Ballew; and his grandparents, Gertie and Malcolm Street. Funeral service will be Wednesday, December 16th at 11am in the Chapel of Cheatham County Funeral Home with Brother Leon Edwards officiating. Burial will follow in EverRest of Cheatham, LLC, in Pleasant View, TN. The family will receive friends on Tuesday, December 15th from 3pm to 7pm and on Wednesday before the service from 9am until service hour of 11am. Serving as pallbearers will be Joey Yearta, Randall Thompson, Derek Ballew, Terry Anderson, Timmy McNeese, and Jeff Hargrove. Honorary pallbearers are Corey Frazier and Josh Porter. Cheatham County Funeral Home in charge of arrangements.

The family of Christopher "Chris" Glen Puckett created this Life Tributes page to make it easy to share your memories.

Send flowers to the Puckett family.