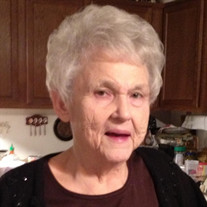 CROWE, Charlotte Ermadeen, age 86, passed away on October 9, 2015, at TriStar of Ashland City. She was born on June 19, 1929, in Centerville, Tennessee, to Charlie Johnson and Sadie Hensley. She worked selling Avon as well as for Maxine&#8217;s... View Obituary & Service Information

The family of Charlotte Ermadeen Crowe created this Life Tributes page to make it easy to share your memories.

Send flowers to the Crowe family.