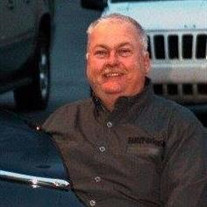 CARMEN “PETE” RAY WILSON, age 58, passed away on Friday, April 14, 2017. He was born on November 21, 1958, in Nashville, Tennessee, to Ronald Clayton Wilson and Betty Brinkley Cox. Pete was a graduate of Joelton High School. He was a Retired THP Officer for the State of Tennessee, working in the Capital Division. He will be greatly missed by all who knew him. He is preceded in death by his father, Ronald Clayton Wilson; stepmother, Fran Wilson; stepfather, Tommy Cox and brother, Freddie Wilson. He is survived by his mother, Betty Sue Cox; daughter, Ashley (P.J.) Demonbreun; brother, Johnny (Lori) Cox; sisters, Sherry (Kenneth) Osborne and Colleen (Tim) Caldera; two grandchildren, Masen and Tara Demonbreun; 4 nieces and nephews and a host of friends. Funeral service will be Friday, April 21, 2017, at 12noon in the Chapel of Cheatham County Funeral Home with Bart Anderson officiating. Burial will follow in EverRest of Cheatham, LLC, in Pleasant View, TN. The family will receive friends on Thursday, April 20, 2017, from 12noon until 8pm and on Friday before the service from 9am until service hour of 12noon. Please note to honor Pete's wishes, in lieu of flowers, donations to Pete's grandson, Masen Demonbreun, for his kidney surgery. Checks may be made to Masen Demonbreun c/o First Tennessee Bank c/o Cheatham County Funeral Home 615-792-2552 cheathamcountyfh.com

The family of Carmen "Pete" Ray Wilson created this Life Tributes page to make it easy to share your memories.

Send flowers to the Wilson family.