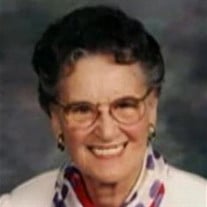 BATSON, Dr. Beatrice, age 98, of Batavia, Illinois, passed away on Tuesday, January 22, 2019. She was born in Charlotte, Tennessee, to George and Lora Fowler Batson on July 13, 1920. At the age of 12, Beatrice announced to her father that she would one day become a university professor. She attended Bryan College, taking her first steps toward achieving her goals. To further her understanding of unanswered questions, she enrolled in Wheaton College in a master’s degree program. She went on to receive her Ph.D. from George Peabody College for Teachers at Vanderbilt University in 1956 and continued her studies with post-doctoral work at Northwestern University and Oxford University. In 1957, she began teaching at Wheaton College where she taught for 33 years. She served as Chair of the English Department from 1973 to 1987, and returned to chair the department for a year when the current chair was ill. Throughout her teaching career, she inspired students with her vision for the integration of faith and learning. Dr. Batson was awarded Senior Teacher of the Year in 1963. She was later named 2007 Alumna of the Year for Distinguished Service to Alma Mater at Wheaton College. In addition to her legendary teaching career, she was also known for her work to organize the Shakespeare Collection and Institute at Wheaton College. She was an accomplished writer as well, authoring or editing ten books, as well as numerous articles, book reviews and essays for journals and magazines. Dr. Batson was an avid scholar. She was a co-founder of VII, the Marion E. Wade Center’s annual journal designed to promote awareness of its seven authors, and to encourage critical assessment of these writers’ works. Literature was not her only focus and passion. She was a deeply committed Christian who inspired students with her vision for the worship of Christ through the love of learning. Dr. Batson is preceded in death by her parents, George and Lora Fowler Batson; brothers, Cooksey and Dewey Batson; sisters, Lillie Cooksey, Sara Rice and Ida Batson. She is survived by her brothers, Robert Batson and Earl (Nancy) Batson; nieces and nephews, David (Darlene) Batson, Leshia Bess, Pam (Relus) Fleming, Joe (DeEtta) Claytor, Sterling (Leah) Claytor, Kim (John) Engelman, and Beth (Steve) Batson; and loving great-nieces and nephews. Funeral service will be held Tuesday, January 29, 2019, at 11 AM in the Chapel of Cheatham County Funeral Home with Reverend William Fowler and Reverend, Dr. Tom Binford officiating. The family will receive guests Monday, January 28th from 4 PM to 8 PM and on Tuesday, January 29th from 10 AM until service hour of 11 AM. Serving as pallbearers will be David Batson, Steve Batson, Carter Preston, Cameron Davidson, Will Bess, Chris Hopkins, and Tim Preston. In lieu of flowers, donations in Dr. Batson’s memory may be made to Wheaton College, Batson-Shakespeare Collection or Wheaton College, Dr. Beatrice Batson Scholarship Fund. Cheatham County Funeral Home 615-792-2552 [email protected] Website for donations: https://securelb.imodules.com/s/1156/donate/donate.aspx?sid=1156&gid=1&pgid=1068&cid=2247&dids=145.146&bledit=1

BATSON, Dr. Beatrice, age 98, of Batavia, Illinois, passed away on Tuesday, January 22, 2019. She was born in Charlotte, Tennessee, to George and Lora Fowler Batson on July 13, 1920. At the age of 12, Beatrice announced to her father that... View Obituary & Service Information

The family of Dr. Beatrice Batson created this Life Tributes page to make it easy to share your memories.

Send flowers to the Batson family.