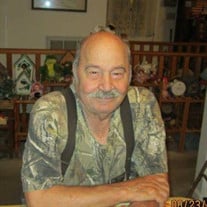 Arion Cole, age 86, passed away on Wednesday, February 9, 2022, at his home in Ashland City, surrounded by his loving family. Arion was born in Huron County, Ohio, on August 23, 1935, to the late Herman Cole and Allie (Wireman) Cole. He was a United States Army Veteran and a retired plant manager for ChemRock Corporation. Arion met his wife, Jean, in Lafayette, Indiana, and they were married on July 3, 1971, where he helped raise their children, grandchildren, and great-grandchildren in Ashland City, Tennessee. He was a dynamic man that took on the role of father to 7 additional children and raised them as his own, adopting 5. Arion was preceded in death by his parents; wife, Mary (Jean) Cole; son, Marty Cole; daughters, Cindy Delph and Janet Mayo; brothers, Ronald Cole, Dean Cole, and Ed Cole; grandsons, Clinton Ryan Delph, Jeff Harvey, and Bradley Krantz. He is survived by his daughters, Lisa (Kevin), Denise (Billy), and LuAnn (Tim); sons, Scott (Doneda), Bob (June), Fritz (Sharon); brother, Fred “Dude” (Velma) of Ohio; sisters, Irene Farmer of Indiana and Jan “JJ” Johnston of Ohio; 31 grandchildren, 44 great-grandchildren, and 1 great-great-grandson. Funeral service will be Friday, February 11th, at 12noon in the Chapel of Cheatham County Funeral Home with Randy Hester officiating. Burial will follow in EverRest of Cheatham LLC in Pleasant View, Tennessee, with military honors. Visitation will be Thursday, February 10th from 3pm to 7pm and on Friday, February 11th, from 10am until service hour of 12noon. Serving as pallbearers are Fritz, Andrew, Kevin, Arion, Ethan and Terry Michael. In lieu of flowers, donations in Arion’s wife's (Jean) memory may be made to Alzheimers Association c/o Cheatham County Funeral Home LLC 615-792-2552 online condolences may be made at cheathamcountyfh.com

Arion Cole, age 86, passed away on Wednesday, February 9, 2022, at his home in Ashland City, surrounded by his loving family. Arion was born in Huron County, Ohio, on August 23, 1935, to the late Herman Cole and Allie (Wireman) Cole. He was... View Obituary & Service Information

The family of Arion Cole created this Life Tributes page to make it easy to share your memories.

Send flowers to the Cole family.