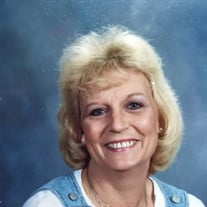 BRASHEARS, Anita Jo Murphy, age 68 , passed away on Monday, August 1, 2016, at her home. Jo was born on February 8, 1948, in Springfield, Tennessee, to John Joseph Murphy, Jr., and Virginia Louise Turns Murphy. Jo was reared by her grandparents, John Joseph Murphy, Sr, and his wife, Nancy Elizabeth Balthrop Murphy. She was a member of the Ashland City High School Class of 1966. Jo was one who was ahead of her time, while people her age were eager to start working, Jo was from a family of educators and attended MTSU and graduated with a B.S. in Secondary Education and Psychology in 1969 (3 years). She achieved her Master’s Degree from Austin Peay State University and worked and retired from the Cheatham County School System. Alongside her employment as a guidance counselor, she was a youth service officer with Cheatham County Juvenile Court and a School Specialist at STARS Nashville. Jo was loved by all who knew her because of her encouraging and nurturing nature. She had a huge heart and it poured out of her. She approached life with such grace. She is preceded in death by her parents, grandparents; husband, Ray Brashears and daughter, Marta Brashears. She is survived by her son, Jeremy (Amy) Brashears; brother, John (Jan) Murphy, III; sisters, Betty (Tom) Beacom and Jean (Chuck Macero) Murphy; three grandchildren, Caleb Brashears, Maranda Dunn and Alexandria Brashears; and special friend, John Lewis. Funeral service will be Thursday, August 4, 2016, at 2pm in the Chapel of Cheatham County Funeral Home. Burial will follow in Pleasant View United Methodist Church Cemetery in Pleasant View, Tennessee. The family will receive friends on Wednesday, August 3, 2016, from 11am until 7pm and on Thursday from 10am until service hour of 2pm. Cheatham County Funeral Home 615-792-2552 cheathamcountyfh.com

The family of Anita Jo M. Brashears created this Life Tributes page to make it easy to share your memories.

Send flowers to the Brashears family.